Notes From The Underground

by Gone Beyond & Mumbles 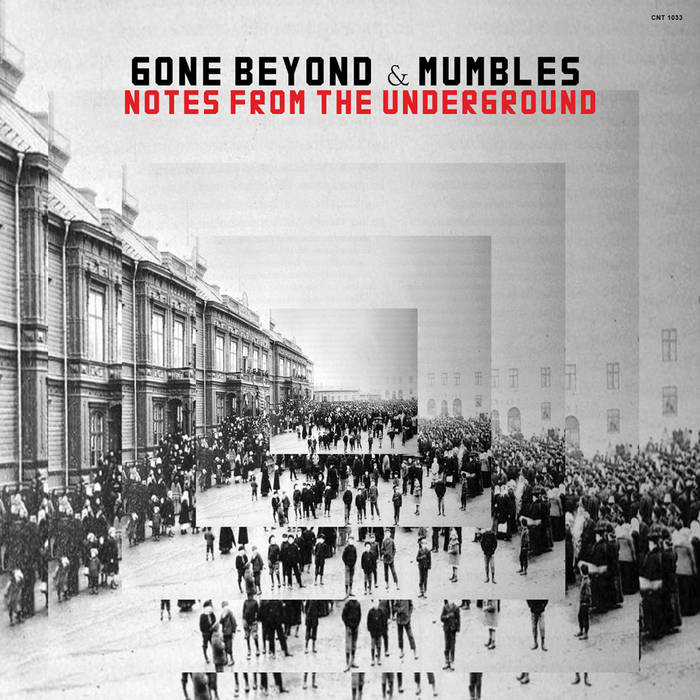 The Executioner from Turandot

Years in the making, Notes From The Underground is an essential and evocative album from acclaimed producers Gone Beyond and Mumbles.

The journey began when legendary DJ Cut Chemist enlisted the duo to participate in a 2007 concert series titled Pravda, held at the Walt Disney Concert Hall in Los Angeles. The series was a tribute to the Russian classical musicians living under the rule of Joseph Stalin, primarily Mosolov, Shostakovich, and Prokofiev. One night featured DJs and producers incorporating these works into their beats and included the likes of Peanut Butter Wolf, DJ Spooky, and Amon Tobin. Gone Beyond and Mumbles spent months scouring through hundreds of recordings from various classical performances and put together five tracks for the show.

Ten years later and the spark of this performance has ignited into a full album, made even more relevant by current events and the socio-political atmosphere. Notes from the Underground is named after Dostoyevsky's classic existential novel, pointing the way to the themes presented by the music. The album is an artistic commentary on the ability of the human spirit to overcome oppression, adversity, and fascism. Gone Beyond and Mumbles have remixed and given a modern, empowered voice to the great composers of Russia who wrote under the yoke of Stalin during the early 20th Century, exposing the struggles and this compelling music to a new generation.

The remarkableness of the project is transmitted in how natural the contemporary beats sound accompanying these vintage compositions. Take “Apropos for the Wet Snow” which uses a melancholy piano motif and flavors it with dusty rhythms, subtle, staccato horn blasts, and echoing soundscapes. Rather than obscuring the feeling of the original piece the production embellishments serve to enhance. “Knight In The Panther’s Skin” is another extraordinary moment, including lush strings, gentle piano, and an operatic vocal over the drums for an, especially dramatic effect.

Gone Beyond and Mumbles previously collaborated on the 2005 album S.E.V.A. for Mush Records and on 2012’s A Duet For Space And Time 10” for The Content Label. Both producers are revered as beat-making legends, with an expressive sonic palette that takes the listener deep into the duo’s mindset. Notes From The Underground is a startling and important document from Gone Beyond and Mumbles, and a welcome return of this collaboration to The Content Label. Hip-hop sampling and remixing is a powerful way to interpret classic themes, and Notes From The Underground is meant to stir the listener toward thought, motivation, and empowerment in these challenging times.

This is an artistic commentary on the ability of the human spirit to rise up and overcome adversity of all kinds.

Jeromy Nail (jeromynail.com): Dope. Been a Mumbles fan for a while. Loving this collab. Thank you!

Aja Allsop (Ketch A Vibe Radio Show - Impact Radio, Cruise FM, The Jazz UK, others): Atmospheric and a massive orchestral sound this is the business people !!!!

MGiK (Sofa Surfing): Stunning! No wonder it took so long.


Hober Mallow (Mighty Reel (weekly on 2SER 107.3 FM, Sydney)): Beautiful music, even before reading the notes I I got a cold sense of foreboding from these. Much deeper than most beatmaker releases I've heard. Thanks for sending, its a genuinely moving set of tunes.

Jon Wesley (Music Goes On Radio Show (weekly on KNSJ FM) / Insomniac / Machine Friends): Excellent msuic. I love all the great drum work and the strings. I'll play all of these.


Jon Fugler (XLNT radio show (Radio Pays de Guéret 96.5 FM) / Fluke): This is for me is truly outstanding...some classy drum programming, beautifully integrated classical elements and with the subtle electronica edges make this a real winning package.. A well deserved 5 stars. many, many thanks x

DJ T-Bird (Los Chicos Altos / Something Else! on Barcelona City FM / WTNR Radio): When's the film coming out? This is the score, right? Seriously, feeling a definite narrative in this, very emotional.

Michael Elves (Program Director - CJUM-FM - UMFM 101.5 FM - Winnipeg, MB): This is pretty wild. I had to check to make sure I didn't have two separate windows open d/t the confluence of boom-bap and classical. Makes me think of what Endtroducing would have been if Shadow had a bunch of Deutsche Gramophone LPs

Floored Capri (Kane FM): For fans of orchestral music and hip hop beats (of which I am one) this is a must have.

DJ Huwston (Niche Productions / Guvera): i haven't heard from mumbles in years - this is weird and dramatic and cool - love it